Hello, it’s great to be back. I have been sitting on the back-burner, on my arse for a while, keeping busy with real life, building a living history program at work, and orienting myself with the history of my new home for nearly 2 years now. Colorado is quite different from “Oregon Country,” Hudson’s Bay history, and the “end of the trail,” and I have had to do a lot of re-reading of late on the Fur Trade here.  Here, I live within 25 mile radius of 4 major fur fort sites,  major historic trails (South Platte, Trappers Trail, and the Goodnight–Loving) and the hunting grounds of the Ute, Arapaho, Cheyenne, and Sioux.  It’s great to live in a place so steeped in history and it is even better awakening visitors to this reality, which is largely forgotten by the general public.

One thing that has always bothered me and I have fallen willfully into myself is “reenactor fads.” The idea that someone else’s research establishes authenticity has always bothered me as a historic interpreter, museum professional, and reenactor. Somehow these popular ideas, being “cool,” and nifty looking accessories catch hold and then suddenly, we have an army of people in walnut shirts stomping around in places they never were and miss-quoting history “ad nauseum.”  This really gets to me when this is done before the public programs.

BEFORE I GO ANY FARTHER, I am not looking down my nose at anyone here. If you like what you have use it. After all, this is a hobby for most (an addiction for me). No skin off my head! For me, I attempt to portray what is typical not the unusual or out of unique about historic people. My training in “history school” made me look at the subject of documentation with scrutiny and intensity, where as many enthusiasts, stop short of its correct application, which leads to erroneous conclusions about historical material culture. I was taught long ago, that true historic research demands corroboration by two or more sources when possible and the sources need to be pure as you can find.

I watch pals strain themselves seeking and delving into “primary sources.” Like a quest for the Holy Grail, we all want to find that one reaffirming piece of historic data that seals the historic deal, absolutely.  These should be the pictures or accounts of those who lived a historical era/experience that occurred to them in the very recent tense and recorded soon after.  They are only primary because they wrote the account down or recorded history as it happened. This can also be a painting, drawing, photo, or other media that accurately captures the occurrence.

“Secondary,” indicates it was either relayed to the person recording the information second hand close to the time of occurrence, or the person lived it at a previous date and recorded or rendered it from recollection.  As far as tertiary goes, it has very little weight in my research but can still be valid. Basically, these would be summation of others research synthesized into major themes. That being said, don’t take my word here either, as this too you would be considered “tertiary.” In other words, just because you read someone’s book, doesn’t mean it was interpreted authentically.

For a long time now, I have wondered about the hooded hats and pointy head coverings depicted by Alfred Jacob Miller in his field paintings.  While I have no doubt they existed, I would wonder why very few artists depicted them on anyone but native people besides Miller. Where are the artifact equivalents in the dusty collections of museums?  How is it that the brigade of trappers newly headed to the summer rendezvous need to make hats when they recently left Missouri resupplied?

I keep hearing from fellow enthusiast the reasoning behind the lack of artifact evidence; “they dissolved in the field “or “who would want dirty old clothes?”  In my time as a museum staffer, I have handled two circa 1840 buckskin coats, one from the northern plains and the other of unknown provenance but attributed to overland pioneers. These two garments came to light after reading articles by well-respected historians saying “no frontier clothing has survived.” To assume something doesn't exist because it is not prominently displayed is a flawed assumption. Most artifacts of even a small museum collection, NEVER get displayed, and many museums have antiquated or undocumented donations.  So why no wolf-eared caps? I pondered this for some time.

Recently the question of “eared hoods” was brought up on other blogs concerning the eastern fur trade in Wisconsin (http://frenchinwisconsin.yolasite.com/) and another dealing with the Middle -ground hunter (buffalotrace1765.blogspot.com), brought this discussion once again to mind. Their thorough research brought to light for me the long native tradition of hooded and animal like hoods for hunting and winter use among native people of North America. Thanks to Ike and Nathan for great posts!

With the well-established native traditions across the continent of hooded headwear, what I have been suspicious of is the frequency and upon WHOM these hats resided during Miller’s 1837 trip. Are they on Metis? Are they on Yankees? Creoles?  Miller’s own words are helpful here:
“The hunter’s form for themselves a peculiar kind of cap:-it has two ears with flaps reaching to its shoulders…the peculiar caps on their heads are made by themselves, to replace felt hats, long since worn out or lost. “ AJ Miller 1837
Here is who we know is wearing them:
·         Auguste: Metis/Creole – Designated Hunter
·         Moses “Black” Harris: Mulatto-Dispatch rider/Trapper
·         LaJeneusse: Metis/Creole – Designated Hunter
·         Louis: Metis/Creole-Trapper 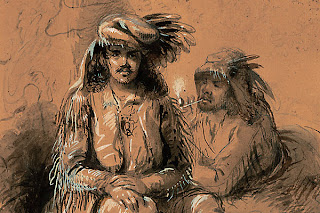 It is not only necessary to discover why they were worn, but also the frequency of wear to try and better understand their place in the trapper’s kit. By far, Miller is the primary source of the depictions of these on white trappers. Other artists related to the fur trade are largely discounted because they did not travel to the field and strangely these hats do not replicate in their art on white trappers.  Both Karl Bodmer and W.T. Ranney witnessed the fur trade.  Bodmer in his trip up the Missouri in 1834 and Ranney as a young artist with trappers involved in Texas independence who had returned from the frontier, depict nothing like AJ Miller on their non-Indian subjects.

Using Miller works solely as a documentarian source is flawed, UNLESS your use the correct pictures. Miller wasn't painting with the intent of being the only documentarian to witness the western fur trade; so much as he was doing so to make his boss’s adventures seem heroic and romantic for his reputation back home in Scotland.

The problem with this, is one must check the dates of the pictures as he generated works from this trip for the next 20 years!  For this purpose, I would only utilize his works from no later than, you guessed it: 1837! Many of his most romantically captivating pictures have multiple versions of the same subjects, some numbering into the hundreds. Many still have no dates, or dates of reproduction as late as 1858-1860 or even 1867!

The more I looked at the images with TRUE 1837 PROVENANCE, the fewer of these “peculiar caps” I saw represented.  In order for this to be genuine primary documentation, the pictures would have to be field renderings to be considered as valid as “Photographs.”  One of the best sources for this is, the book; The West of Alfred Jacob Miller by Marvin C Ross.  Composed only of 1837 sketches and watercolors rendered in the field, one can get a true, yet incomplete sampling of the material culture of the mountain men and the 1837 caravan to the summer rendezvous. 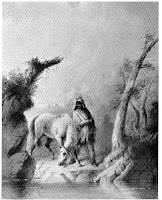 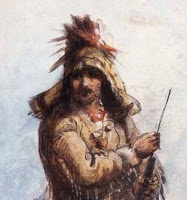 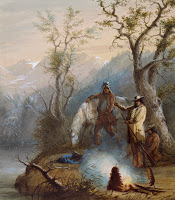 Mind you, there are approximately 100 plus field works by Miler. The vast majority of depictions with “wolf-ears” have no more than 2 individuals and mostly a singular individual among a group, wearing such hats. Two of the pictures are of native people.

The OVERWHELMING hat preference in the field works is slouched hats of pale complexion. They are seen in numerous states of wear and cocked in many different rakish ways. Some apparently have the brims cut down or have worn to a more narrow and haggard shape.

Other artists lack such hats. Both Ranney and Bodmer depict hoods/hats of fur. Bodmer on an Assiniboine hunter in winter wearing a badgers skin hood and Ranney with simple “pill” style hats of what could be interpreted as beaver on his trapper subjects. In the journal of Isaac P. Rose, the hats of this nature are used for stalking buffalo. This man while recounting his exploits in the late 1870s hung out with Bridger, Carson, Wyeth, and Russell in the field from 1834-38 and while he is a secondary resource, was in the mountains during Miller’s appearance there.   He also mentions these “caps” being made from wolf skin specifically.
Here is the corresponding journal entry from Miller’s 1837 journal from the hunting scene “approaching the buffalo:

“The hunters form for themselves a peculiar kind of cap—it has two ears with a flap reaching to the shoulders. This is worn with a double object in view, one of which is to deceive the buffalo in approaching—under such a guise, the hunter is mistaken for the animal as a wolf, and is suffered to approach quite near…” AJ Miller 1837

So what can we take away from this whole discussion? Firstly, is there are only about 14 guys out of 100 pictures with this head-wear I don’t believe the trappers relished wearing these hats. The vast majority of the group is portrayed wearing them as make-do head coverings some of blanket or cloth some of apparently buckskin.

It may also be quite possible that these are part of the hunting attire for just that specific task as 4 of the 17 images revolve around actual hunting. Miller quotes reflect the word “hunter” and “trapper,” each with singular significance in respect to duty. However, Antoine a fine hunter himself is depicted in a tan slouch a hat with broad brim.
1868 photo of Dakota Sioux hunters

For me personally, portraying the typical trapper, I find this hat very “non-typical.” However, this hat has a seemingly specific application among the native inhabitants and among the 1837 brigade as well….Which I will discuss next time……
Posted by Bill Armstrong at 6:15 PM