Non-typical Rifles from Beyond 1840 (Top to Bottom): or built mountain rifle circa 1850, English percussion “Indian Gift” rifle circa1840, Lehman attributed circa 1845 longrifle 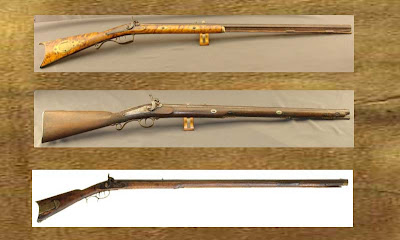 
So it would seem once again, that historic reality is stranger than fiction. The rifles that are out there for collecting and in the dark vaults of museums, often don’t reflect the classic designs that we all aspire to own as reeanctors. My opinion is that many simple rifles like these were wielded expertly on the American Frontier for a long period of time and changed hands and ignition systems as they survived or traded hands with various owners.  Just as significant, is that many of the "famous" rifle types which have been immortalized mostly by popular culture, are not typical of the working trapper but of the truly famous and affluent. I think of the various Jim Bridger and Kit Carson attributed rifles and guns, which exemplifiy their later careers beyond the rocky mountain fur trade era. The reality maybe that many more "non-typical" rifles were out there than are given credit for.
Next time, I will look at “guns” that are often overlooked in place of their more accepted styles. I will eventually look at examples in paintings, ledgers, and art from famous depictions of trappers, including some odd looking depictions of pistols.
Happy New Year to all far and wide!
[i] Egles, Ross,  Gifts for Indians Percussion Guns and Rifles Before 1842
[ii] ibid.
[iii] Russell Carl P.  Firearms traps and tools of the Mountain Men. U of P. 1967. 2: 72-73.
[iv]  Rifles featured at John Gunderson Antique Militaria;  www.gundersonmilitaria.com/longarm.html
Posted by Bill Armstrong at 3:18 PM